Although the focus of my article about pizza dough rollers will not be on dough rolling machines, it’s going to include 1 or 2 of those, too. Just to see what the deal is all about and if we’re better off with using a rolling pin in the end.

We shouldn’t confuse pizza dough rollers, which are supposed to help us stretch and shape the dough either manually or by using a dough rolling machine, with a pizza dough docker, which is used to poke tiny holes into the dough (like using a fork on pie dough).

Before you decide to buy a dough rolling machine, you should know that there’s one very cheap alternative: a wood pastry pizza roller with 2 ends: a bigger roller and a smaller roller at the opposite end.

Many people end up using it both for making pastry and for rolling the dough in a pizza pan or in a baking sheet.

It’s quite practical and small enough. So, if you have absolutely no storage place for a rolling pin, this will be great.

My fear is that it might break the bubbles in the dough but that’s the same thing that can happen when using a rolling pin, too.

It will help you bake a uniform crust, while the smaller pin will make it easy to fill in dough to the edges and ensuring uniform depth around the inner rim of the pan.

It’s so easy to use that even kids will love it.

Another surprise is that it can be used to crush nuts, crackers, cookies, and bread crumbs. For such a cheap price, it sure packs a few surprises.

Pizza Dough Rollers: My Choice Is a Rolling Pin 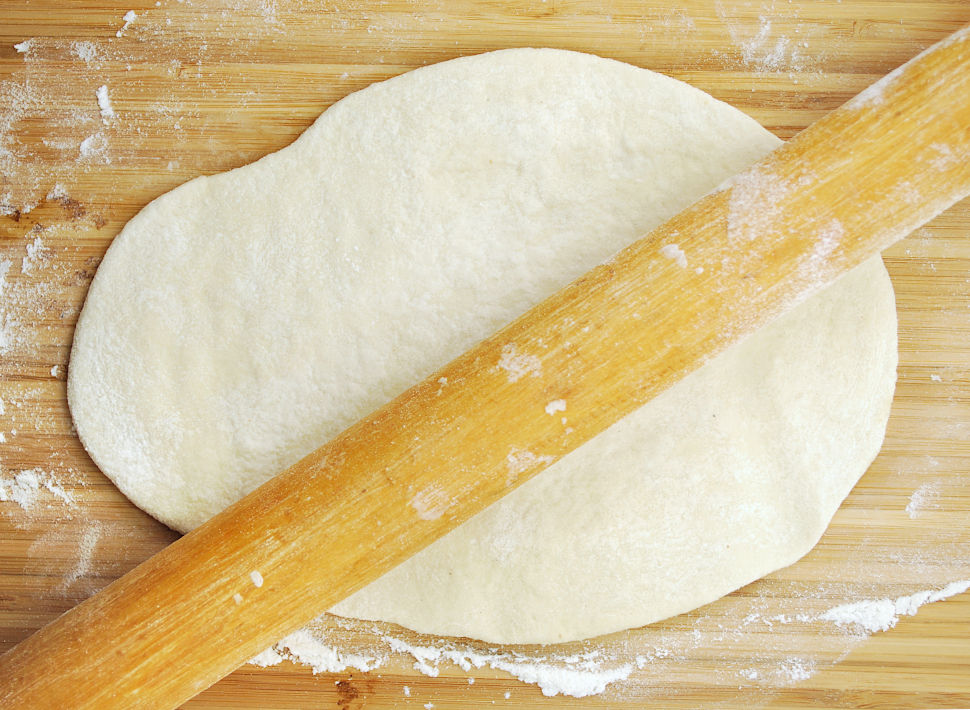 When I first started making pizza I was using a bread machine to make the dough for me. I took care of the toppings and of preheating the oven and the pizza stone.

I also assumed that I needed to use a rolling pin in order to stretch the dough. Those were the times when we didn’t go on YouTube to see how things are properly done. I only had knowledge by going through a lot of restaurants and watching professionals do their mastery.

I knew without a doubt that I shouldn’t attempt stretching the dough by hand when I wasn’t even capable of flipping pancakes in the air.

So, I settled on using a rolling pin as the choice for my pizza dough roller. I still think it’s one of the easiest way to achieve the desired shape in just a few seconds, whether you want it round of squared.

Although a rolling bin is not a dough rolling machine, it’s still one of the best choices for pizza dough rollers, a tool that can be used by anyone without difficulty.

If I didn’t have a rolling pin that I could use, I would put the ball of dough in a round pizza pan and stretch it in the pan until it matched that perfect round shape. You can use parchment paper, although I prefer pouring a bit of olive oil and spreading it all over the pan, if that’s the bakeware I’m using.

If you don’t want to spend a lot of money on a dough rolling machine and you’re not exactly able to stretch it by hand, then I definitely suggest using a rolling pin as your pizza dough roller.

I wrote a post on the best rolling pin for pizza dough. You can read that if you want even more options, although I will also review some of my favorite picks in this article in a few moments.

There are two main categories to choose from:

Professional bakers prefer the French one over the American-style due to comfort. Handleless pins are more comfortable to grip, easy to maneuver, and they give a more nuanced feel for the dough.

With that in mind, my preferences also run in the same direction.

One of the most important features when choosing the best rolling pin is how it feels when you hold it in your hands and if it rolls smoothly and evenly.

Last but not least, it should also be easy to clean. However, as long as you sprinkle and massage a bit of flour into the pin, nothing should stick to it and cleaning shouldn’t be a problem at all. It’s just a matter of rinsing off the flour.

Overall, this one qualifies as the best rolling pin for pizza dough. The quality of the wood is awesome and it looks amazing with that sapele color.

Moreover, the wood is special treated to prevent bacteria breeding.

It is not dishwasher safe but it can be easily washed by hand and the manufacturer assures us that the smooth surface will keep the dough from sticking to it.

But you’ll have to get used to one particular feature: it’s kind of short, it measure 15.7 inches. At least you can easily store it in a drawer.

If you want a longer pin, check out the one made by J.K. Adams, which is 20.5 inches long. I just overall prefer the Muso Wood one.

Most rolling pins are made of wood. However, if you want to feel like a rock star in the kitchen, this is an awesome choice.

Since it’s made of stainless steel, it’s more expensive than its wooden counterparts. But it looks so amazing. And the name of the manufacturer, Feed the Lions, is one of the best I’ve heard.

Without a dough this is one of the best rolling pins for pizza dough. It’s made on the French-style so it just looks like a long stick of metal.

It has a superior brushed matte finish to ensure the pin won’t tear or stick to the dough. It’s also stated that, due to that feature, it requires less flour when working with fondant.

It’s also flawlessly straight, which is easy to achieve since it’s made of stainless steel.

Since it’s made of metal, it also won’t require any kind of maintenance, which is great.

Another interesting thing is that you can easily chill this pin for pastry or warm it up in water to make decorating with fondant easier. That’s an unexpected useful feature that has thrilled a few users.

Dough Rolling Machine: Is it Worth it?

A dough rolling machine doesn’t come cheap. Even the cheapest model can be as expensive as a good stand mixer or cost as much as a Zojirushi bread machine. I prefer spending my money on those first.

Still, let’s see what a dough rolling machine has to offer by reviewing one that is a bit on the more affordable side.

In theory, this dough rolling machine is great. Plus, compared to other models, is not that expensive.

I said in theory. So, let’s get the cons out of the way and then we’ll focus on the pros.

The main thing that users complain about is the flimsy construction.

I mean, in a machine that costs this much, you definitely wouldn’t expect that to be the main problem. After all, it shouldn’t be that hard to make a dough sheeter for pizza that uses a hand crank. It’s not even fully automated.

One user complained that one of the adjusting knobs is broken off and that seems to be the problem for quite a few of those who received this dough sheeter for pizza.

On the other hand, there are some who are completely happy with it and call it a sturdy machine.

And some praise it that it takes all the work out of making awesome pizza. Although, you still have to knead the dough, let it go through fermentation and proofing, add the cheese and toppings, and finally bake it.

Now that I’ve reviewed even a dough rolling machine and talked about other options for pizza dough rollers, we need to answer this very important question: should we only just hand stretch the pizza dough for absolutely the best crust?

If I’m being honest, the direct answer would be a total absolute yes: hand stretched pizza dough is the best actually.
But, let’s also be realistic: how many of use actually can make thin-crusted pizza by just stretching the dough by hand?

I can get away with stretching it by hand on the work surface but, here’s the truth: it takes me much longer than it would if I was using my very best rolling pin.

I just choose to make an awesome dough and still use my reliable pizza dough roller (meaning rolling pin) to shape it however I want.

If you want some awesome inspiration for making a pizza dough the right way and doing some awesome recipes after that, check out the Flour Water Salt Yeast by Ken Forkish. It’s a book about bread that reads like a good novel mixed with a lot of tables and numbers.

Effects of Hand Stretching the Dough

Professional cooks throw the dough in the air in that spiraling fashion we’re all in awe with not for show but to obtain a perfect distribution of thin dough.

But on the work surface, hand stretching the pizza dough by hand, has not made me achieve the same perfect distribution of the dough. It always ends up thicker in some places, especially the perimeter of the crust.

When the dough is stretched using the finger tips, from the center to the outside, pockets of gas are pushed into the crust.

It allows the pizza to retain gas bubbles at random places.

That’s why, when it’s baked in a wooden- or gas-fired oven at really high temperatures, bubbles with will pop up in various places. Those who own these kind of ovens, should also consider getting a pizza oven thermometer and the best wooden pizza peel.

If you want to know how to hand-stretch pizza dough, then the best way to try is by watching a video, like this one here. I think that’s the easiest way to approach it.

For those of you who would still prefer using some kind of pizza dough rollers, you can use a rolling pin or a dough rolling machine. 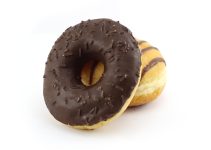 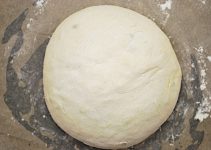