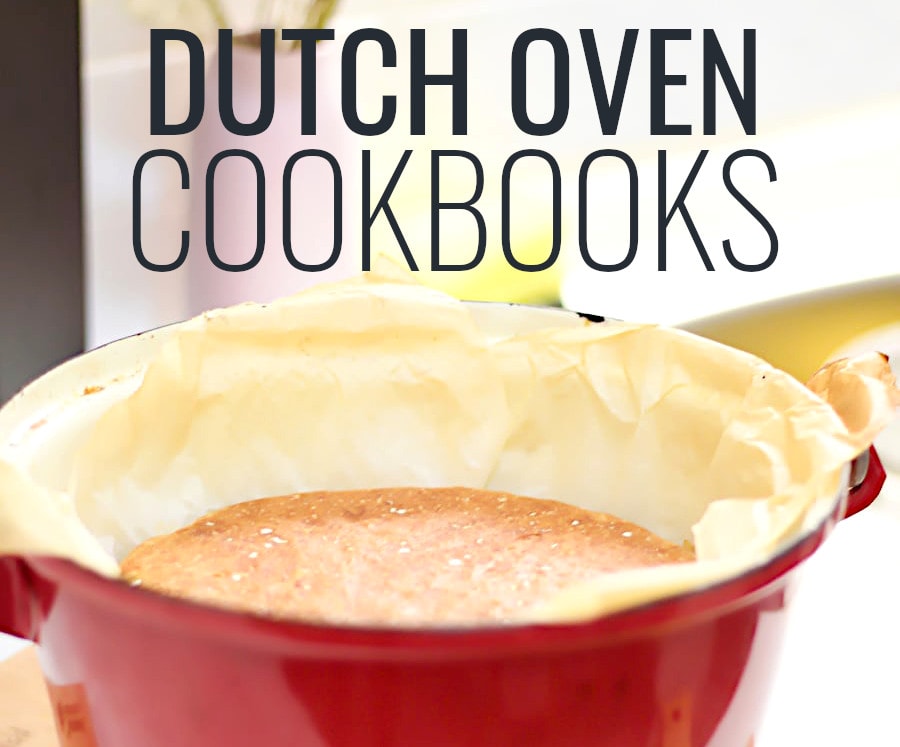 I think Dutch oven cookbooks are a fantastic thing to have in the kitchen because Dutch ovens are one of the most versatile pots on the market.

The versatility of this type of pot with a lid is what attracts so many people to experimenting with them.

It can replace a pasta pot, sauté pan, frying pan, saucepan, roasting pan, and so on.

In terms of baking bread, you won’t need a separate baking stone for bread. You only need a baking sheet if you want to make baguettes and you need a loaf pan if you’re keen on making sandwich breads.

Some models might be expensive, especially from well-known brands like Le Creuset and Staub, but there are also a lot more affordable options, like the ones made by Lodge.

Those from Lodge can also be used when going camping. They’re made from cast iron so, they might need a bit more maintenance but they’re also incredibly sturdy and can be taken everywhere.

Check out my post on the best Dutch oven for bread because I also talk about how to bake bread in them.

What You Can Make in a Dutch Oven

You can bake bread in Dutch ovens but you can also cook meat, make soups, pasta, casseroles, stews, chili, rice, and all sorts of recipes. You can even make cobbler and all sorts of desserts.

The principle is using medium to low heat. Medium heat works great but you won’t ever need the heat on high.

Dutch ovens are described as the original low-and-slow pot. The pot gets very hot and retains all that heat throughout cooking. It’s what makes them so great at baking bread.

The high capability of heat retention and the lid that creates a sealed chambered with steam and heat, these factors lead to an imitation of the conditions encountered in a professional bakery.

The food is cooked slowly but evenly. Heat is evenly distributed. Plus, moisture is locked in and the flavors get intense. You will be able to cook all kinds of delicious foods.

Even after the heat is turned off, the pot will stay hot for about half an hour, it will keep meals warm.

There are a few cooking techniques that you’ll discover when cooking in a Dutch oven:

Let’s see which are some of the best Dutch oven cookbooks and what kind of recipes they offer.

This one covers recipes for instant pot, slow cooker, air fryer, sheet pan, skillet, grill, grill pans, and Dutch oven. So, it’s a little bit of everything for everyone. It’s a complex cookbook, well beyond a best Dutch oven cookbook.

But it includes 140 recipes for all those different type of cookware that I mentioned.

What makes this cookbook so appealing to so many people?

The fact that it has wonderful recipes, quite easy to make most of them, pretty easy to follow.

More importantly, this is targeting people who want to cook healthy without loosing on delicious flavors.

The quick recipes are ready in 30 minutes or less.

There are also vegetarian, gluten-free, dairy-free, and freezer-friendly recipes and each recipe is marked to show in which of these categories it fits.

I love that it matches so many dietary needs and choices.

The book is sectioned by type of cookware:

The instructions are succinct and easy to follow, even by the most inexperienced people.

Most recipes serve 4 people but there are larger ones for 6 or 8 people or smaller ones that serve 2.

It’s a Dutch oven cookbook and so much more. If you are interested in experimenting will all that cookware and making healthy dishes, this will be the perfect guide.

2. Cook It in Your Dutch Oven by America’s Test Kitchen – Awesome Cookbook Just for Dutch Ovens

This is a very popular cookbook for Dutch ovens. The focus is only on this wonderful pot, which is awesome.

And there are 150 recipes. That’s a lot. Plus, the price is pretty decent for a book this size. I really like that.

I love the pictures and the instructions are easy to follow. There’s not a lot of reading to be done. It’s an awesome cookbook for everyone, even for those with not much experience in the kitchen.

In the introduction, we are also recommended some pots that America’s Test Kitchen considers to be the best but I like that they don’t only focus on expensive options.

Considering that they only recommend very large sizes, 6.5 quart or 7 quart sizes, it makes you wonder why the focus is only on such large sizes. Those are definitely not meant for a family of 2. More like a family consisting of at least 6 members.

Moving on, let’s talk about recipes. There’s no mention of which are gluten-free.

The recipes for all chapters pretty much follow the same scheme: a large focus on meat recipes, with a few fish recipes, and just a few vegetarian recipes.

They really cover a lot of recipes.

Well, as a warning, not all recipes involve just 5 ingredients that you can count on one hand. Some include 7, 8 ingredients but are not counted because they are considered pantry staples or things that are presumed that every kitchen contains.

With that out of the way, let me tell you why I think this is an awesome cookbook.

It has 101 recipes, which is plenty. Those recipes cover a lot of sections, there’s an impressive variety.

I appreciate the inclusion of a breads and desserts section. The sauces section is a very nice surprise, make sure to consider it.

This is great for beginners, the instructions are easy to follow by everyone because each recipe is only focused on including a few ingredients. Not a lot of prep is involved, which is another plus.

There is no nutrition information, this is a book for people who don’t care about calories but care more about feeding their families with delicious food that’s quick to make. It’s pretty heavy on carbs.

Another important aspect: each recipe indicates if it’s gluten-free, nut-free or vegetarian. There are quite a lot of vegetarian options. It also includes serving size, prep time, and cook time.

Having a 5-quart pot will work great.

Check out her website jerseygirlcooks.com if you’re not sure that this is the right cookbook for you, you’ll find plenty of recipes there.

All the rest of the cookbooks for Dutch oven on my list are geared toward families of 4 or 6. But not everyone cooks for a large family. Some of us have to cook just for one while others have to cook for two. That’s why I couldn’t leave this book out.

The recipes are wonderful and very easy to follow.

You can cook the recipes by using a pot that’s anywhere from 3.5 quart to 6 quart in size. That’s another reason why I live this book, those with smaller Dutch ovens can enjoy awesome recipes, too.

The only thing to complain about is that there are just a few pictures throughout the book. But that is compensated by the vast array of wonderful recipes.

Even so, some might find the lack of pictures troublesome. Keep that in mind before making a purchase.

Maybe, if you want to know how the recipe should look like, search it online and just take a quick glance at the pictures. You’ll find out in a few seconds.

There are 125 vegan recipes in this cookbook. Those are a lot of recipes to expand your horizon of vegan recipes. And the price is really good.

Some recipes are cooked using a sheet pan or an electric pressure cooker.

It also states the number of serves, prep time, and cook time.

There are 8 main chapters:

The instructions are really easy to follow and the pictures look great. There are vegan varieties for a lot of worldwide famous dishes.

This is a smaller book and I think that the price is just a bit high. But it doesn’t go into the expensive territory.

It’s great for beginners and for people with busy lives that still want to enjoy some home cooking. More appropriate for large families since the recipes are 4, 6 or 8 servings.

The authors tell us that there are more than 70 recipes but I actually wanted to know the exact number so I simply counted them. There are actually 97 recipes or so, I just counted them once, I didn’t double-check. So, more than those 70 something recipes that I expected.

There are just a bunch of sections since it’s a smaller cookbook for Dutch oven.

You will find quite a lot of delicious recipes for each section:

I don’t like that there’s no bread section but if you’re only interested in making delicious dishes in your Dutch oven, this cookbook is pretty good.

There is no indication if a recipe is gluten-free or vegetarian and there are just a few pictures.

But the instructions are very easy to follow. It’s an awesome Dutch oven cookbook for those who don’t like reading a lot.

The very large majority of recipes require a 5.5-quart Dutch oven so be aware of that. If you have a large pot, this is the right book for you.

There are a few desserts that are made in a 2-quart model but I don’t see the point in that, how many people own multiple Dutch ovens of different sizes?

7. How to Cook Anything in Your Dutch Oven by Howie Southworth – Hilarious and Delicious

Frankly, I would get this Dutch oven cookbook just so I can read what it says under the name for each recipe.

For example, the first recipe is named vampire-proofed meatballs accompanied by “You put how much garlic in here?”.

Pretty much they all made me laugh, their names are hilarious and it just makes you want to figure out if those hilarious descriptions really match. The only way to find out is to actually make the recipes, talk about an incentive.

There are 6 very nice chapters:

There are plenty of recipes to make you laugh and to make you crave even more. The price is pretty good and this is not a small book.

Also, the pictures are beautiful.

The best way to describe it is: classic American comfort foods and new global favorites. They’re an awesome mix.

There are no breads recipes.

Well, there’s one thing we notice right away without even checking out the content: the price for this book is quite expensive. It’s one of the most expensive Dutch oven cookbooks on my list.

Regarding the best cocotte for making the recipes, Staub recommends their 5.5-quart one, which is one of the most expensive on the market, because their recipes serve 4 to 6 people. The 4 quart is definitely a lot cheaper.

It definitely covers all the bases, every recipe that we might want to make, including the section for bread recipes. Plus, the pictures are absolutely stunning.

Even so, in my opinion, there are other much better Dutch oven cookbooks and that’s why this is my last recommendation, I hope you enjoy at least some of them. 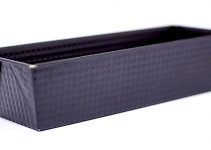 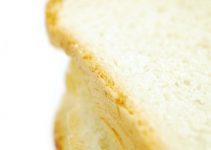