The direct answer to the question how much yeast is in a packet is: a packet contains 1/4 ounces or 7 grams of yeast. It depends on which system of measurement you prefer using but pretty much all recipes work with grams and not ounces.

If the recipe you’re making mentions adding 1 package of yeast then you should add 7 grams of yeast to your ingredients.

Later on, we’ll also discuss the intricacies of establishing how many teaspoons of yeast are in a packet. 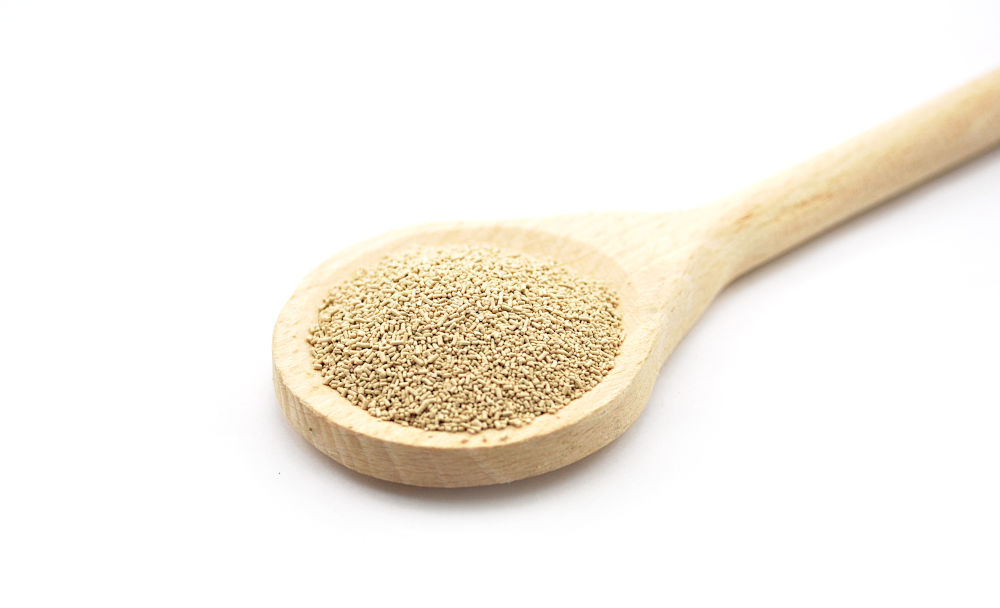 When we’re posing the question how much yeast is in a packet, the question has one purpose: there might be some cookbooks that call for “1 package of active dry yeast”.

If you buy yours in bulk, like most of us definitely do, then you need to know exactly how much yeast is in a package.

I must admit that I haven’t come across these kinds of recipes but I know that there are people who definitely have encountered this method of expressing quantities. I definitely don’t approve of expressive quantities in packets or packages, it’s pretty absurd if you ask me.

For yeast, I expect to see just two measurements: grams and teaspoons. I will also admit that I don’t love it when a recipe just expresses its requirements only in grams.

For example, if you’re trying to make recipes from the Better Homes and Garden Skillet Meals cookbook, you’ll find that their recipe for deep dish-skillet sausage-portobello pizza sounds delicious but it calls for 1 pkg. active dry yeast. Among all cookbooks that I am aware of, that’s the only one where I found this measurement of adding 1 package.

That’s one example where you have to add 7 grams of yeast to make pizza dough. Those who buy their yeast in bulk, will definitely need to know how much yeast is in a package.

If you want to measure in grams, I recommend the OXO Good Grips Food Scale. For very small increments, a good option is the American Weigh Scales MS-600.

How much is in a Fleischmann yeast packet?

All yeast packages have a standard weight. A Fleischmann yeast packet also weighs 7 grams or 1.4 oz. That is true for their ActiveDry and RapidRise yeast.

They also have the Fleichmann’s Pizza Crust Yeast, which has the same measurements. They really are standard.

But this manufacturer also sells in jars of 4 oz, which are the equivalent of 16 envelopes. And in 1 pound bags. They have quite the variety.

How Many Teaspoons Are in a Packet of Yeast? 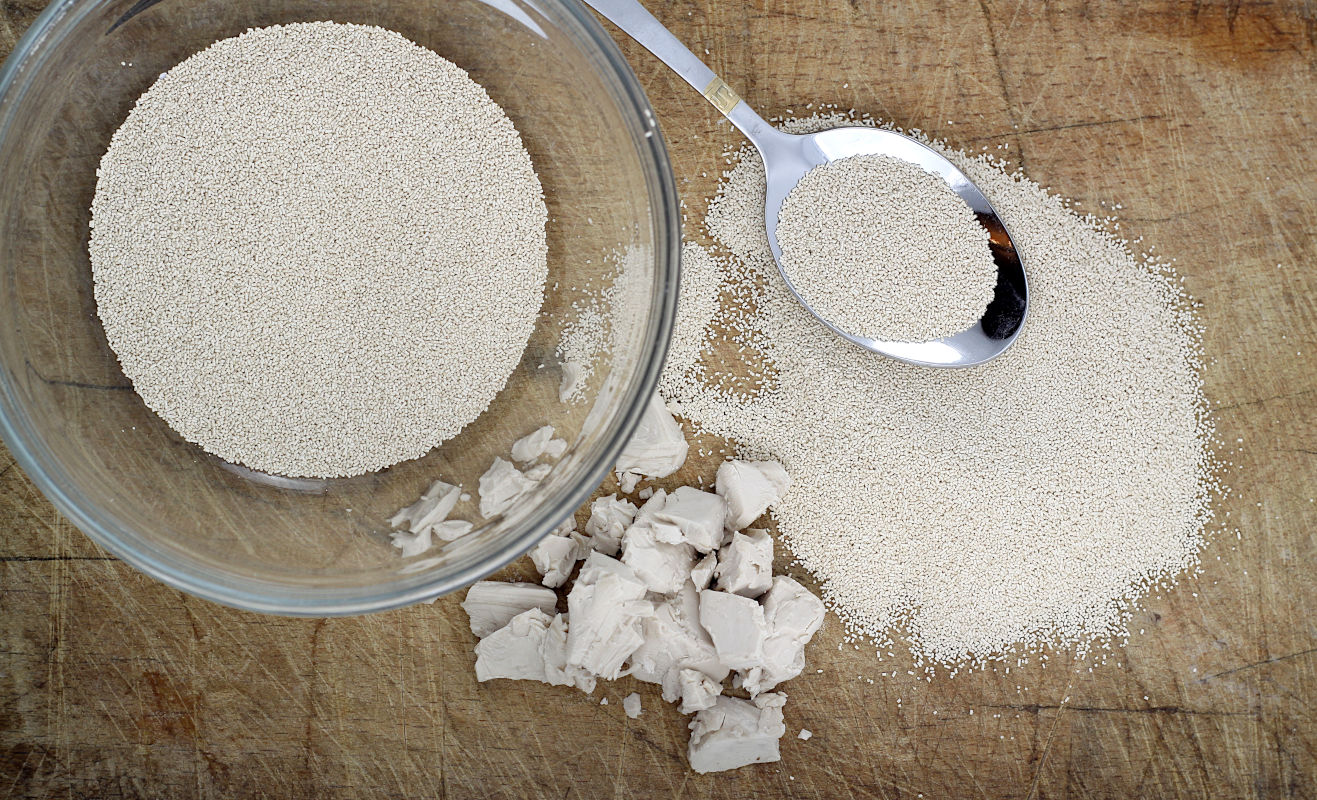 To take things further, we should also answer the question how many teaspoons are in a packet of yeast because pretty much all bread or pizza dough recipes have yeast quantities expressed in 2 ways: teaspoons and grams.

There seems to be a third way that I wasn’t entirely aware of: measuring in packages.

Well, I easily gave you the answer that there are 7 grams of yeast in a packet. Will I be able to just as easily answer how many teaspoons are in a packet of yeast?

No, I won’t. The matter is a bit more complicated.

We actually have to talk about the 2 most used types of yeast: instant dry and active dry yeast. Recipes will indicate which type should be used.

I will just quickly tell you that the best and most popular is the SAF Instant Yeast. It works whether the recipe calls for active dry or instant dry. It comes in a 1 pound pouch. If that’s what you’re buying, it helps to know how much yeast is in a packet, just in case. For other options, check out my post on yeast for bread machine.

If you’re worried about the big 1 pound quantity, don’t be. You can refrigerate it. If it’s stored airtight, you can keep it in your refrigerator for quite a long time. On the other hand, freezing can kill off a small percentage of it.

The equivalent of 7 grams of yeast is 1-3/4 teaspoons of instant dry yeast. That’s what we learn if we follow 2 of my most beloved books: Flour Water Salt Yeast is one of them. The other is The Elements of Pizza. They’re both written by the amazing baker Ken Forkish.

If you take your time reading The Elements of Pizza, you’ll come across one phrase: “a ¼ teaspoon of instant dry yeast weighs very close to 1 gram”. A simple calculation, leads to:

Or we can say that 7 grams are the equivalent of 2-1/2 teaspoons of active dry yeast. Where does that answer come from?

It’s actually what you’ll find if you use a Zojirushi cookbook, which comes with Zojirushi bread makers. So, if you’re interested in bread machines, you’ll see that 7 grams are the equivalent of 2-1/2 teaspoons of active dry yeast.

Moreover, we can also state that 7 grams are the equivalent of 2-1/4 teaspoons of yeast. That’s what I found most of the answers on thriftyfun.com to be. They don’t mention whether they’re talking about the instant or active dry kind. I’m assuming that they’re applying the conversion to both measurements.

Doesn’t all that make your head explode? It does make mine explode a bit. Why are things never simple right till the end?

How Many Teaspoons Are in a Packet of Yeast? Final Answer

If your recipe calls for 1 package of yeast then measure 7 grams with your kitchen scale. Get one from OXO and you’ll know that it’s reliable.

If you don’t have a kitchen scale, add 1-3/4 teaspoons of yeast if you’re using instant dry or 2-1/2 teaspoons if the recipe calls for active dry.

If you’re using the SAF Instant Yeast, just add 1-3/4 teaspoons instead of a package because this is a strong yeast, preferred by many bakers.

That’s my final answer based on very reliable answers. In my opinion, it doesn’t get more reliable than a professional baker or a bread machine book from Zojirushi.

Grams vs teaspoons when measuring yeast

Some amateur bakers might prefer measuring in teaspoons because it can be very fast.

It’s also advantageous for those who don’t own a really good kitchen scale that’s precise when measuring grams. Believe it or not, some kitchen scales are not that good at measuring grams accurately. But if you get a scale like the one from OXO you don’t have to worry about inaccurate measurements.

When it comes to measuring my yeast, I must admit that I prefer the teaspoon method.

If you have a really good kitchen scale, then it won’t be a problem to measure those small yeast quantities needed for a single recipe.

However, those who are not amateur bakers who are into regular baking, will definitely prefer measuring in teaspoons.

I also prefer it that way, it’s just faster and it’s how I’ve gotten used to measuring dough ingredients.

That’s because my love for baking and pizza making started with me using a bread machine. All bread machine recipes measure the yeast in teaspoons. Well, they also include the grams equivalent but I wasn’t interested in measuring 7 grams of yeast every time I made a dough or loaf of bread. 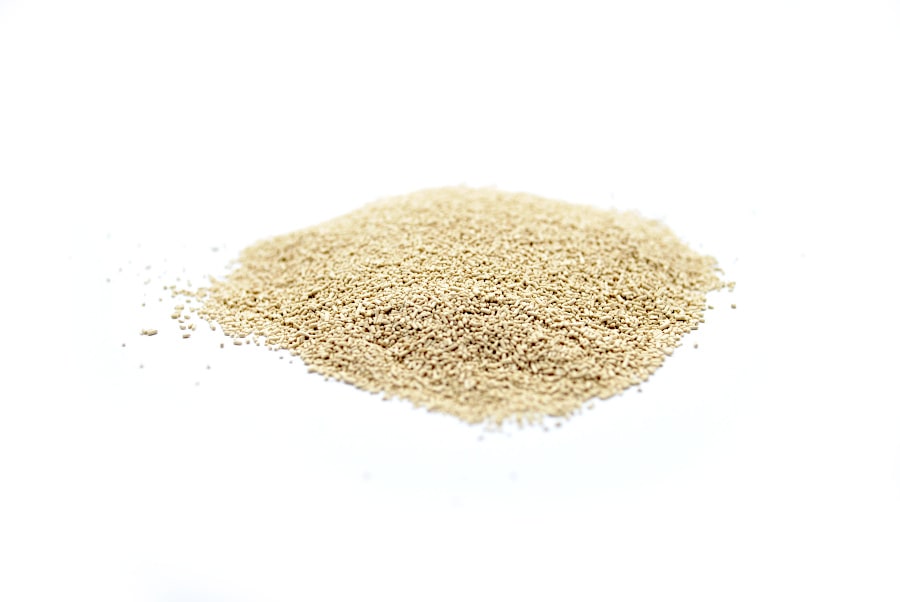 Yeast is the ingredient that makes the dough rise. Without it, we can make flatbreads but we can’t make our delicious loaves or baguettes or focaccia or pizza, and the list can go on for ages.

There are 2 ways to obtain yeast for baking breads and pizza.

It matters to measure it accurately because it contains a lot of viable cells in a single teaspoon. If we want to get consistent results, we must rely on accurate measurements.

It’s why professional bakers prefer to go by grams and not by teaspoons.

What if you add less yeast?

However, there’s also the situation where smaller quantities of yeast are used intentionally.

For example, if you want your dough to go through a lengthier fermentation, you can opt to add less yeast. It’s especially done if you let your pizza dough in the fridge for 24 hours or longer.

As artisanbreadinfive.com also tells us, experienced bakers prefer using a smaller quantity of yeast to build a more delicate and delicious flavor of dough. The rising phases will be much slower, taking longer. Experiment with changing measurements when you have time on your hands.

Long fermentation coupled with small amounts of yeast can bring a change in color, flavor, and texture. These subtle differences can only be experienced if you experiment at home when you have the time.

Before you get to all that awesome experimentation, at least now you know exactly how much yeast is in a packet, whether you measure it in grams or teaspoons. 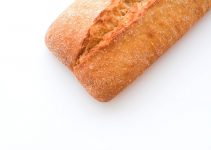